It's hard to believe The Forgiven comes from the same pen of the man who gave us the biting The Guard and also Calvary.

In this latest from John Michael McDonagh, there's still a degree of bite from the story, but the screenplay lacks the precision to scythe through its targets this time, leaving the viewer feeling somewhat muted by the end. 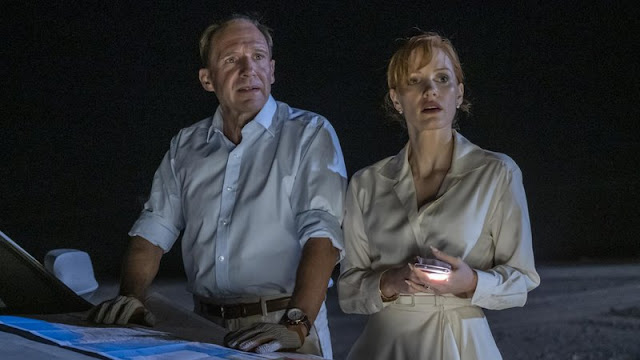 Based on a 2012 Lawrence Osborne novel, it centres around a party being thrown by Doctor Who and Game of Thrones star Matt Smith's Richard Galloway in the mountains of Morocco.

Ralph Fiennes and Jessica Chastain star as bickering couple David and Jo Henninger, who've been invited to the party. On the way to their destination, an increasingly drunken David, resentful of both Jo and her friendship with Richard, puts them into dangerous territory after a distracted driving moment causes him to kill a boy in the road.

As the party gets in to full swing, the Henningers' world unravels as the price of their actions comes for them.

There are delicious barbs to be had early on in The Forgiven, and many of them hit home perfectly on target. But as the film goes through its 2 hour run time, there's a feeling the creative well has run dry, a takedown of the bourgeoise feeling more indifferent than anything else.

The ensemble is impressive. Fiennes goes from ghastly to recalcitrant with ease, and ends up with a degree of sympathy despite all the odds. Smith's lounge lizard approach is also welcome, and Chastain's growing disdain and character change are potent fuel to a fire that's simmering away.

Email ThisBlogThis!Share to TwitterShare to FacebookShare to Pinterest
Labels: The Forgiven: NZIFF Review