Tinja is a wannabe gymnast, whose mother Aiti (Heikkila) wants the very best for her. Aiti is the very definition of a pageant mother, constantly pushing Tinja too far and documenting all the best moments for her lifestyle blog. 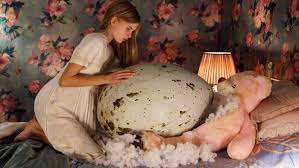 When a bird comes into Aiti's house and destroys her pristine world, rather than tend to the wounded and confused bird, she snaps its neck in full view of her daughter, her shocked son and her comatose husband. But Tinja, shocked by the actions, follows the wounded bird into the woods and discovers an unhatched egg. Taking it home she nurtures it, until it hatches into something shocking.

Hatching is an icy aloof drama that is as glacial in its pace as it is in its emotions.

Bergholm keeps things tight in the execution, but the film can't escape its beyond pedestrian pace that starts to feel drawn out as it goes through its 85 minute run time. The leads are strong enough, but they're not quite enough to make the film feel like it doesn't have enough to say.

The creature FX are impressive, and the subtext of the film is a little too obvious, but Hatching makes a reasonable fist of its horror edges, and its jump scares early on are nicely handled.

Hatching may want to say something about mother-daughter relationships, and of growing into your own skin, but it's not quite clever enough to make you feel like you've seen a masterpiece. It may have been more impressive as a shorter feature, but Hatching (Pahanhautoja) never quite hits the highs it's aspiring to.