Director: Julien Fournet
Animated fare that's got much in common with Shrek's aesthetics, Pil's Adventures is a sweet, if slight, movie about an orphaned girl Pil who lives on the streets of Foggyborough.
As the kingdom readies itself to celebrate the ascension of its prince Roland, Pil and her weasel pals witnesses a coup from the nefarious regent Tristain who's determined to stay on the throne no matter what the cost.
Having transformed Roland into a hybrid chicken cat creature, Tristain blames it on Pil and sets the kingdom on her, forcing her to flee and also to try and clear her name. Will she save the day? 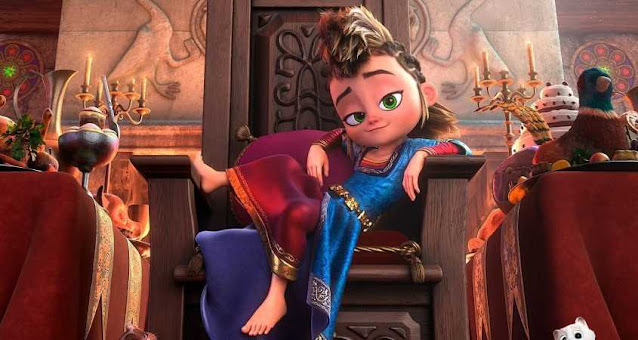 Clearly Gallic in origin, but beautifully laid out, Pil's Adventures is an animated tale that will probably appeal more to the children than across generations. It lacks the kind of smarts that you'd occasionally get from savvier fare, but younger kids will lap up both the sillier edges of a goofy would-be knight helping Pil, the chickcat hybrid and the message of standing up for yourself.
Not exactly didactic or overt in its messaging, Pil presents a morally upright central character, whose generosity and heart are traits to be admired and copied. With an inclusive message from the start, and a gentle sense of a moral compass, Pil's Adventures presents as innocuous fare that will easily keep some elements of the family amused.
The mix of fantasy, the feeling of a quest, cross-breeding creatures and a sock puppet that's very reminiscent of Mr Fibble from Red Dwarf all add up to some fleetingly enjoyable pleasures, and a romp in a kingdom that doesn't outstay its 85 minute welcome.
By Darren - June 02, 2022