Cast: Chris Pratt, Bryce Dallas Howard, Sam Neill, Laura Dern, Jeff Goldblum
Director: Colin Trevorrow
Jurassic Park is back in a film that seemingly wraps up the series and reintroduces some of the OGs to the proceedings. 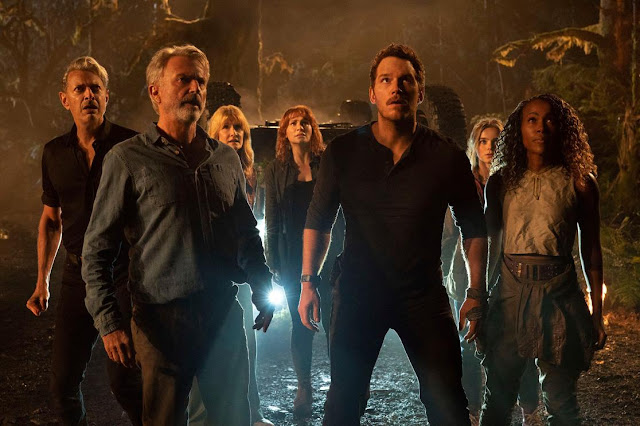 Jurassic World Dominion isn't really interested in doing much new and exciting, other than offering a few lazy jump scares and making you feel like you're on an overstuffed Haunted House carnival ride.
In the conclusion to the franchise, Colin Trevorrow takes up where the Fallen Kingdom ended in 2018 - with dinosaurs living among us, and an obviously uneasy co-existence beckoning.
Bryce Dallas Howard's Claire is freeing captive dinosaurs held hostage on breeding farms, Chris Pratt's Owen Grady is playing horse rancher to wrangling dinos in the mountains and both of them have become surrogate family to the clone child Maisie Lockwood born out of the end of the last film.
However, when a locust plague begins attacking crops on farms in West Texas, Ellie Satler (Dern) returns to the fray, and ends up soliciting help from Dr Alan Grant (Neill) who's still scrabbling around the dirt of various digs. The pair find themselves heading to a mysterious lab, run by Campbell Scott's Steve Jobs-like Dodgson - and things are further complicated when Claire and Owen have to trace their stolen child who appears to be heading to Dodgson's lab...
Jurassic World Dominion is a film that really doesn't know what it wants to do with itself.
From its muddled mix of storylines, to its desire to hit beats from the legacy of Steven Spielberg's 1993 film, Trevorrow doesn't seem to know which direction he wants to go in. He throws in a Han Solo-type pilot into the mix at the expense of other characters - a symptom of a film that has no real identity of its own.
Perhaps it's the fact it squanders some of the premise of dinosaurs among us, and reverts to the tried and tested formula of forests and dinosaurs hidden in their midsts before attacking. Even the T-Rex this time around feels neglected, with a kaiju-style fight feeling tacking on at the end after someone realised in the edit suite that the franchise's star character had been robbed of screen time.
That being said, and dumb moments like a dinosaur chase through the streets with a motorbike aside, there are moments that impress.

From a giant dinosaur stalking Bryce Dallas Howard's character that riffs on Apocalypse Now to the easy chemistry between the original cast (despite the annoying need to play the original theme every time they appear on screen), there are tantalising reminders of why the dinosaur rollercoaster can work so well.
And the creatures themselves are brilliantly realised and brought vividly to life - with some old favourites returning too. It's just a shame they are sidelined for the humans and a script that doesn't make the best of its original promise.
The original film some 30 years ago had the benefit of simplicity, the desire to present the wonder and awe of the creatures - this latest spends so much of its time removing every single thing that makes the Jurassic Park franchise work to try and mythologise it that it forgets what kept the series from going extinct in the first place.

Ironically, Jurassic World Dominion is the strongest case yet for why this franchise needs to be preserved in ember and left to casually go extinct.
By Darren - June 09, 2022