Cast: Chris Evans, Keke Palmer, Taika Waititi, Peter Sohn, Dale Soules, James Brolin
Director: Angus MacLane
Disney Pixar's Lightyear knows exactly what it wants to do - it wants to take you back to 1995 when you fell in love with Andy, Woody and Buzz. 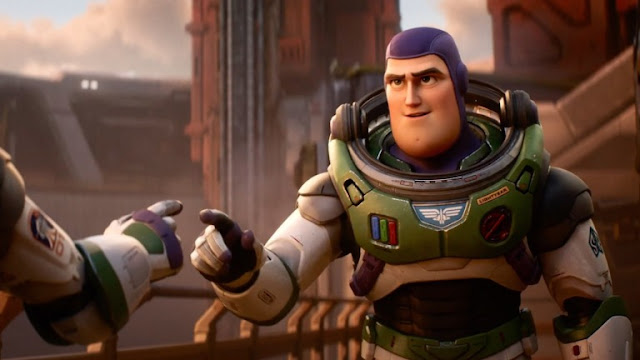 It's evident in the opening title cards which reveal that this is the movie that Andy fell in love with, and why he wanted a Buzz Lightyear toy.
Which, in someways, is perfect for the space-set romp that follows - a boy's own adventure of a trapped Space Ranger trying desperately to get his comrades back home, but failing to learn the lessons of teamplaying.
However, what Lightyear doesn't do is easily scale the heights of the emotional depth needed to rekindle the universal humanity of Toy Story - aside from one ageing montage, the likes of which was devastatingly deployed in Up and has remained the aspirational bar ever since.
Evans voices Lightyear, the brash arrogant Space Ranger who causes his crew of 1200 to be marooned on a foreign planet after failing to listen to pleas for help and to stop. Determined to right his wrong, and ultimately to beat his own punishing failure guilt, Lightyear keeps trying to break the hyperspeed barrier but ends up spending years in space. 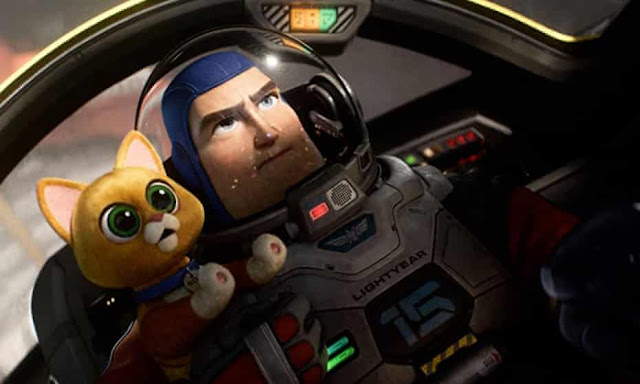 Upon his return some 60 years in the future, Buzz discovers that his settlement is under attack from the Zurg - and with a ragtag crew of cadet misfits, he sets out to save the day.
There are vicarious thrills to be had in Lightyear, a space saga that wants to take us to infinity, but barely gets beyond the stratosphere.
Chiefly, Peter Sohn's robot cat Sox, an emotional support companion thrust upon Lightyear to help him adjust by a colleague, steals the show with quips and unexpected moments that enliven proceedings. Evans is also strong, but he has to work within the boilerplate of Buzz's emotional characteristics brought so vividly to life in Toy Story, so you know he won't deviate from the brash, non-team playing, self-delusional toy we saw back in 1995. He makes the most of Buzz's arc of learning about team-playing, the crushing defeat of the passing of time, and to cope with failure.
There are touches of emotional too, from the aforementioned montage to the openly gay relationship portrayed on screen by Lightyear's cohort Hawthorne. And Pixar's animation here is superb - elements of Gravity and Top Gun: Maverick's tension mix with 2001: A Space Odyssey homage in the hyperspeed sequences mix deftly with the depth of space world-building on the alien planet - it's a vista packed with background details that builds the wonder of space.
But Lightyear remains a fleeting joy, a space saga romp that disappointingly lacks a bit of depth but is a perfect rejoinder of the kind of space film boys adore when times were simpler and the likes of Flash Gordon and King of the RocketMen adorned Saturday morning cinema serials.
By Darren - June 14, 2022