Cast: Jackie van Beek, Damon Herriman, Jemaine Clement
Director: Armagan Ballantyne
Billed as a comedy, but in truth, more a bittersweet tale of a relationship ending, Nude Tuesday is not quite the raucous romp that skin-filled posters proclaim, nor is it the gut-busting comedy others abroad have heralded.
Spoken entirely in gibberish throughout, with subtitles provided by Julia Davis, an English comedian renowned for her darker take on life, it's the story of Van Beek's Laura, whose marriage to Bruno (Herriman) is on the rocks.
Laura spends her day trying to sell pitches for adult diapers, whereas Bruno sells taps. Their existence is a muted one, an invisible but evident strain pulling apart their existence in Zǿbftąņ, a fictional island.
On the night of their wedding anniversary, the pair is gifted an excursion to a commune aimed at rekindling their love and putting them back on track - with its ethos of "putting couples back on track who no longer rumble in the jungle", it seems as if nothing can go wrong.
But headed up by Clement's Bjorg, a guru whose free love is as dodgy as his philosophy, it could be the final straw for Bruno and Laura. 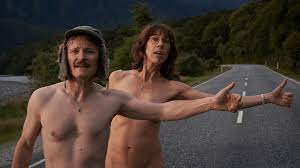 Barbs and bickering are the order of the day for this snippy melodrama that in truth is more depressing than uplifting. It has the feel of a Danish take on a relationship in its dying days, but lacks some of the sharper edges to craft something searing and sensational.
With its washed out aesthetic on show until Bruno and Laura relocate, there's a stiflingly unhappy atmosphere to engage with here - the joylessness is relentless, and coupled with Davis' subtitling, there's a maudlin feeling throughout. (The filmmakers claim there's a more riotous comedic version out there, but in truth, it's hard to see how that would match up with the visuals).
As the film builds to its naked glory, van Beek and Merriman make for good bedfellows, a poignancy and sadness enhanced by the script's subtle reveals. But it's in the guru and his shenanigans that the film comes undone, a mixture of obvious gags, slights at yogi-like shamans and a flailing ethos that feels flaccid when it should stand tall and revel in its own absurdities.
Instead, it's a high premise concept with only occasional low hanging rewards.
By Darren - June 15, 2022