The MCU continues to be refreshing in ways that surprise in Ms. Marvel, a new limited run series premiering on Disney+ this week.

After Moon Knight's six part run saw the series lean away from the convoluted mythology that has become the Marvel norm, Ms. Marvel's premiere stays firmly away from years of films and back story - but subtly acknowledges all that has gone prior. 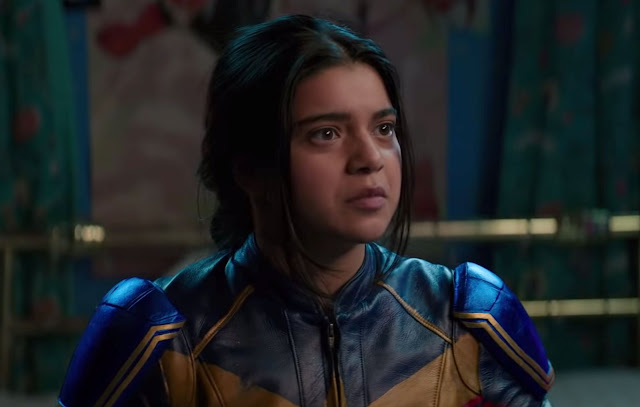 Iman Vellani is Kamala Khan, a high school student whose world is filled with fan art adorations of the Avengers, and particularly the heroics of Captain Marvel. But her mother isn't keen on her daughter heading out to parties or the newly-announced AvengerCon, because of the dangers of not trusting anyone else.

Undeterred, and determined to win the cosplay contest for her Captain Marvel efforts, Khan grabs an ancient family heirloom, sent to her unsolicited by an aunt. But she's unaware that this jaunt outside and defying her family is going to have serious implications.

There's an infectious joy to Ms. Marvel, with its daydreaming central character.

While tracing many similar themes to the mother-daughter relationship of Turning Red, and the push-pull dynamics from films like The Farewell, the Marvel Universe is given a blast of multi-culture and diversity that's long been lacking in its pale, male and stale superhero stable. 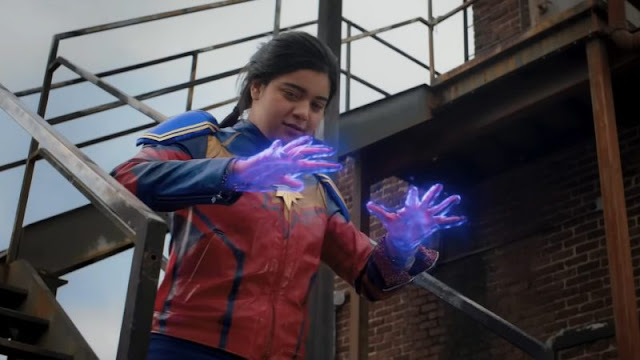 But there's also comedy, and a seizing of young teenage life, and even elements of Ferris Bueller's Day Off thrown in for good measure - this is a series whose colourful edges and whose creative use of emojis, graphics and music give it the kind of revitalising edge that Clueless and its iconic OST brought to 90s teen rom coms.

In among it all though is Iman Vellani, a star in the making.

With her clear skill at turning her hand to anything the script delivers her - from a musical number to the dynamic with her family, she's never anything less than engaging or enjoyable to watch.

In many ways, Vellani's Kamala Khan is the fan in all of us, writ large and loud and proud on the screen. It may be an origin story in many ways, and is clearly paving the way for Khan's appearance in The Marvels, but this feels fresh, engaging and adorable in its storytelling - without ever once overdoing everything you'd expect from a Marvel series.

Ms. Marvel is streaming on Disney+ from Wednesday June 8 with new episodes weekly.