Studio 666 is a Scooby Doo film, a vanity project without the wit, inventiveness or decency to leave when it's not welcome.

It may have a Shaggy in its long-haired hero Dave Grohl, but the only dog in this movie is the script, which calls for ham, silliness and supernatural acting that's beyond the pale in so many ways.

Based on a story by Dave Grohl (that in truth should have been aborted and sent to hell), it's the story of the Foo Fighters as they try to record their 10th album. Relocating to an Encino mansion to record their masterpiece, Grohl becomes obsessed with creating a 45 minute masterpiece. 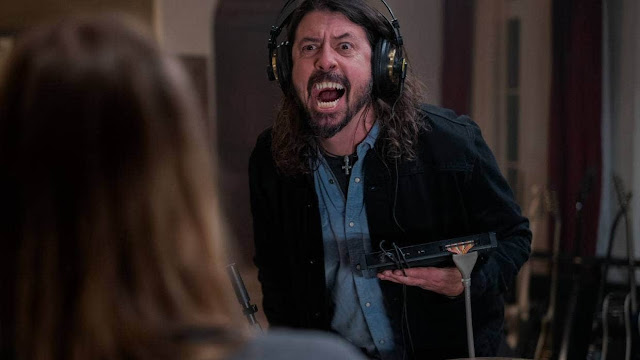 However, the obsession is fuelled by demons which haunt the house, after a thwarted recording session from the 90s turned deadly - and soon all the Foo Fighters are fighting for their lives and their souls.

Mixing comedy and horror should be an easy win, but Studio 666 plays so fast and loose with its goofiness, and the extreme variable quality of the acting, that most of it fails to land anything. With some truly awful dialogue as well, the whole thing runs out of steam after about 30 minutes, and then flails badly around, trying to find a narrative path that doesn't head to hell.

Grohl plays goofy (as he demonstrated years ago in the Learn to Fly video) but the level of his acting is questionable, though not as questionable as others in the group as they try to act, and fail miserably. While the whole film does feel like a hangout movie steeped in gore in some ways, the project just doesn't have enough goodwill to see it through - even with the inclusion of the likes of John Carpenter and an utterly out there Lionel Richie cameo.

There are some impressive moments - the demons of the house are wondrously realised, and a dream sequence where Grohl is haunted by the spirits is cleverly and concisely executed. But hints of Freddy Kreuger and overblown soundtracks to lame jump scares just drag the goodwill into the mire and executes them mercilessly.

Studio 666 isn't a movie for anyone who's not a Foo Fighter fan or has lost control of their senses. For everyone else it's an utter exercise in tedium and endurance - for the record, it should be dispatched to hell as soon as possible.